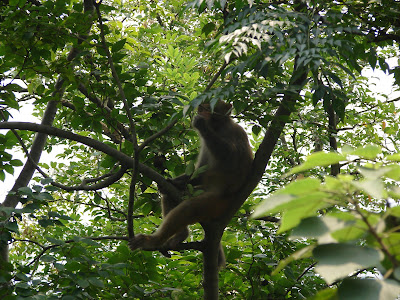 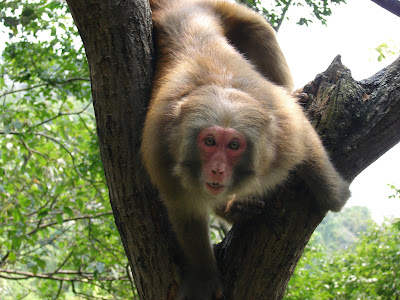 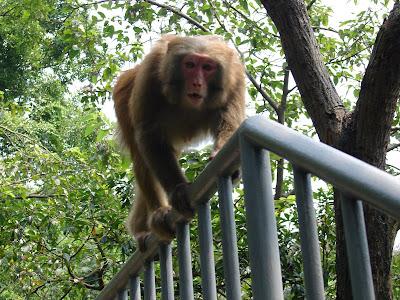 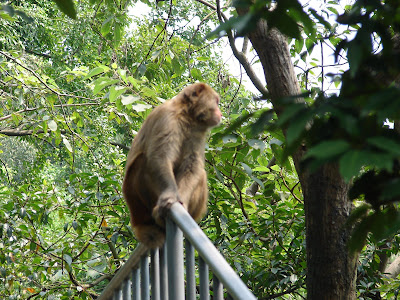 While still in Seven Star Park I walked up to the top of the karst peak to get a good view of the city. On the way down I found a path that looked as though it has seldom been traveled and of course that is my favorite path. As I walked I started hearing sounds coming from the trees. Mostly a rustling of the branches. The more I walked the louder the sounds got and the more frequent. Then I saw a monkey up in the top of one the trees and I thought "how cute". Then there were a couple of monkeys that I noticed in another tree and I thought how fortunate I was to have run into some monkeys. Then the monkeys started to converge on me. The next thing I knew there were monkeys everywhere and they meant business. They were invading my personal space all of a sudden and I was getting a little uncomfortable. One large monkey was only a few feet from me staring me down.


Then I remembered that I had read somewhere that they were expecting food and that you were supposed to thrust your palms into the air showing that you had no food and start walking. It seemed to work fine and they no longer pursue you.

There is a Chinese saying, " One monkey can halt the path of a thousand soldiers." Now I understand what they meant. lol