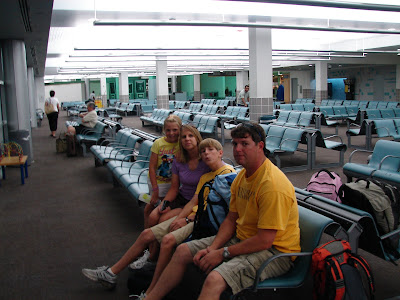 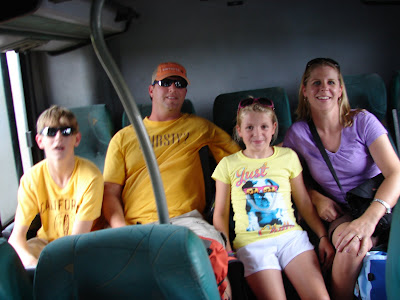 We left BR at 3 am to go to the airport in NO. Luckily Jon agreed to take us to the airport. Our flight to San Jose, Costa Rica left at 6 am and after a 45 minute layover in Miami, arrived in San Jose at 11:30 am. Refusing to pay $25 for a cab to San Jose costs us an extra 1.5 hrs on the local bus. Due to improper planning by me mostly but that's part of backpacking. After getting on the local bus, we had about 4 hrs until we reached La Fortuna,   No air conditioning on the bus but windows down, cool rain outside and beautiful mountain scenery made the trip enjoyable. Kids slept some as we were all exhausted. The budget hotel was only a couple of blocks from downtown La Fortuna in a quiet neighborhood. A double room with private bath and triple room with private bath for only $50 total for both rooms a night. After checking in we headed out for our fist real meal of the day. ( Whopper at Airport Burger King was $8 by itself which we declined)

Seeing the lava flow at Arenal Volcano was one of the sights we came to La Fortuna to see. We hired a minivan to take us to the best location to view the lava. The top of the mountain is best viewed at night and when there is rain. There was a slight drizzle when the van picked us up and drove the 15 miles to the viewing spot. There were  other tour buses and vans but our guide took us to the best local spot which only had one other local van. We were rewarded with an hour of beautiful sights and sounds from the volcano. Red hot molten lava flowing down the mountain and the occasional rumbling of the volcanic gases releasing from the top. Back to the hotel at 8:30 pm and everyone exhausted.

Pictures include Kade and Madison at the NO airport waiting for there FIRST airplane experience, riding the local bus from San Jose to La Fortuna, eating their first typical Costa Rican meal (chicken, rice, beans, plantains and pasta salad) from a soda  (local family restaurant) and Arenal Volcano. 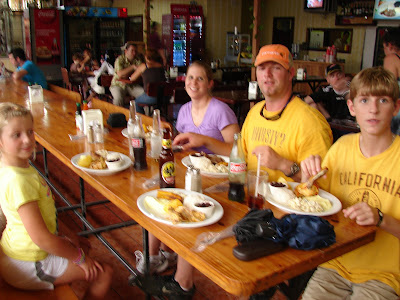 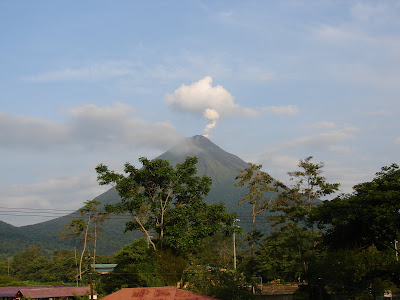