NOMADIC LIFESTYLE, EARTH, United States
After getting my first passport in 2006 and traveling to climb Kilimanjaro in Tanzania my life changed. I began the process of getting rid of all my possessions and traveling the world. Traveling to over 125 countries and all 7 continents, hostels have been my home. This "new life" has taught me what is important and it was NOT accumulating money or possessions. Traveling is the best education. I hope my blog will encourage others to travel. My World Tattoo was a way for me to express my PASSION FOR TRAVEL.


While sitting in the Pirate Bar in Utila Honduras waiting for the World Cup to begin, I quickly noticed a girl, Jules, who I had met earlier in Antigua. After speaking for a moment she quickly turned around to speak to someone else and that is when I noticed it, a tattoo outline of the world. I, along with many other backpackers, quickly told her how awesome it looked. She also said that she planned putting a red dot on all the places she has traveled. While sitting at the table looking almost hypnotically looking at her tattoo every time her back was facing me, I realized that I had finally gotten the inspiration for the "travel" tattoo that I had been thinking about since my trip to Thailand. She told me that she had gotten the tattoo from Mike at Tattoo Antigua in Antigua, Guatemala. I realized that if I was going to do that it would have to be a tattoo of the entire World including the specific countries. I also knew that I would like to color in each of the countries that I had traveled to. I went back to Antigua and got the outline of the world done by Mike and then got the countries colored in by Natural Mystic Tattoo in Pineville, Louisiana. The following pictures are of my initial tattoo and the progression of coloring in the countries. 70 counties so far with hopefully many more to follow. 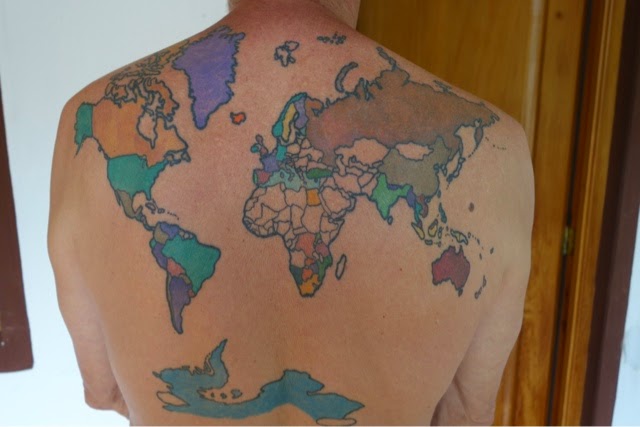 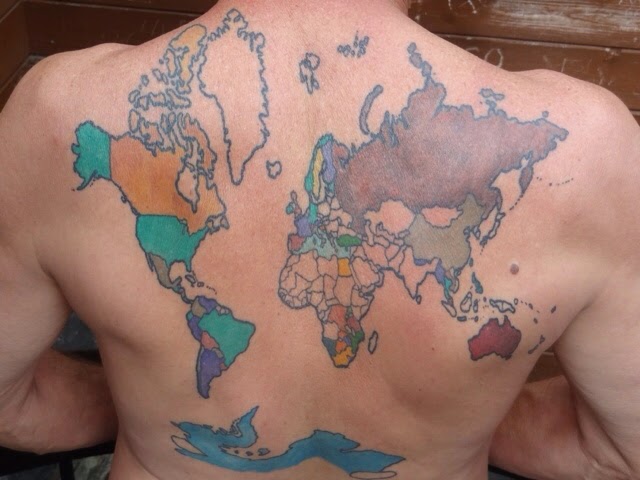 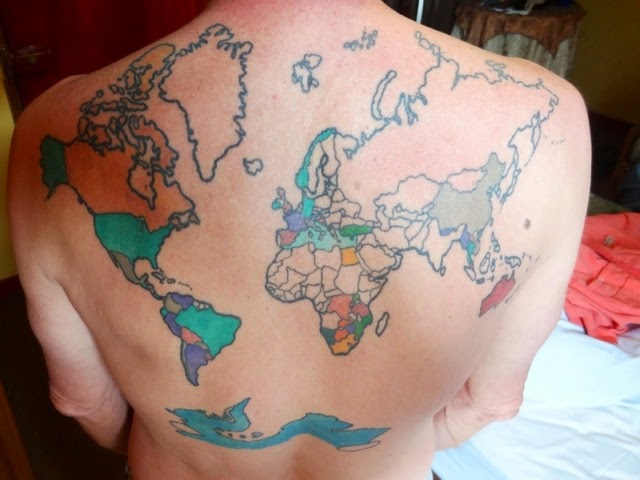 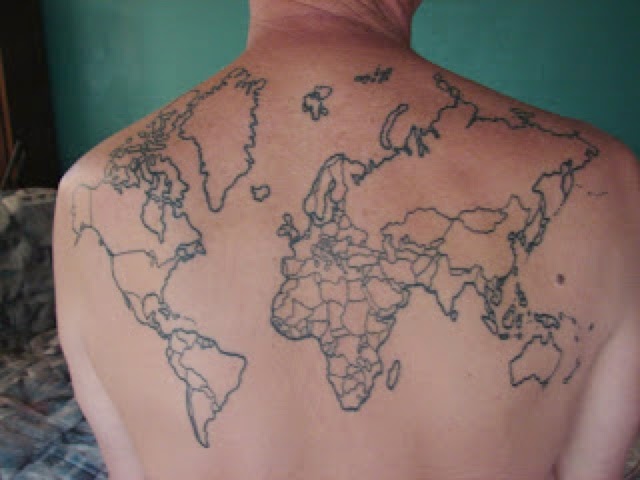 Just found this while searching Google for world map tattoos... So sick man! As a fellow world traveler I've had the same idea for a while, but have never pulled the trigger on getting any ink. Keep exploring my friend!

Awesome tattoo! Also found your page while looking for a world map tattoo. Curious about the cost though?

Wow, that is truly awesome! Go get your back fully colored, the world is waiting! :-)

This is amazing. Hope you can continue to add to it.

Russia it's going to hurt

I love it, but where's Antarctica?

You forgot to color in Alaska....lol...if you are coloring them in by Countries, Alaska is a part of the USA. :P

This is truly amazing! One day everything will be coloured, imagine that :-D

This is amazing! Great idea!

awesome, do you count airports :D

AT the bottom in blue, only did the area which I traveled in January 2011.

Yes it did and they messed up the color and made too dark so had to go over it again. Several hours non stop pain.

Thanks, did not think of all the pain I would endure when I began but most of the large countries are completed and will finish India, Vietnam and Indonesia starting Jan. 2013

As long as there are more countries to visit and can find a way to get there. Thanks

I cannot think of a more fitting and proper, not to mention meaningful, tat for you, Bill. Let me congratulate you for permanently inking something very symbolic of you, which is what it's all about anyway.

back when I was backpacking I planned to do this same tattoo on my leg! that was over ten years ago. good to see people besides myself doing the same.

Thoroughly enjoyed the blog. Great pics also...Japan would be an amazing place for tattoos...even heard of the bar where they handcuff you on a travel DVD. dapatkan berbagai macam model tato di sini

Great tattoo. I only wish you got a Gall-Peters equal area projection map instead of a regular mercator projection.

Where is Antarctic Continent?

Dude, after the WW3 ends and the dust settles, if you are still alive, your map won't be worth a shit. Because all the continents will sink and we will leave on barges and rafts and eat mutant fish.

Antarctica is on 1st page and most recent pic. Had too add it because did not intend on going there, it just happened. Do to size constraints only put the area visited by me.

Nice but I think Africa should be pictured much larger.... immappacy?

you have never been to visit the famous Kilimanjaro, then upon hearing its name many different things may come to mind! It raises adventure, legendary and amazing images to mind, but to find out what it's really like why not purchase a few Cheap Kilimanjaro Ticket for you and your loved ones and see for yourself.!!

I think Africa should be pictured much larger.

Wowww awesome tatto... come to jakarta.. i want to hv pic with ur tatto... :d

First of all i want to tell you firstly i don't like the tattoos, but when i see your site i totally change my mind..