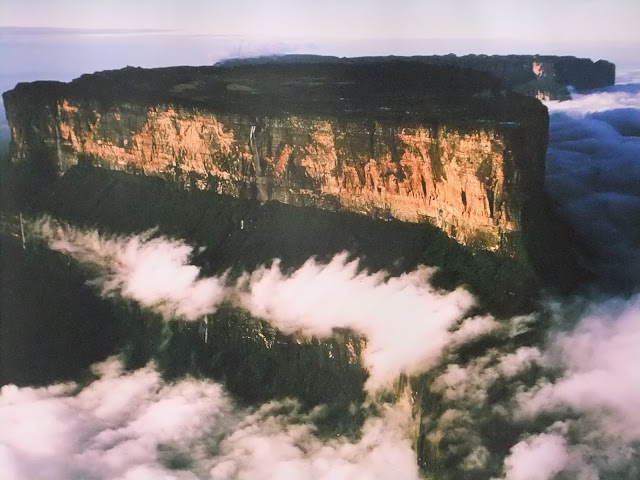 The first day of the six day climb started out fine but all of a sudden I found myself faced with a rattlesnake ready to strike right next to my foot. I kicked at the snake repeatedly trying to deflect its strike and keep its fangs from sinking into my leg.  I was still kicking when ....................

I woke up on the bus to Santa Elena (starting point for the trek) and was kicking the foot rest of the seat repeatedly. I quickly looked at the passenger next to me and luckily he was still sleeping. I was still 6 hrs away from Santa Elena. I wondered if this was a nightmare or a premonition. Upon arriving at Santa Elena I signed up for the 6 day climb and at 6 pm we had the briefing about the climb from the local expert who has written 3 books on Roraima (from Lost World fame).

He said the climb would be difficult but the real danger was snakes. Coral snakes, RATTLESNAKES, and some other snake which could kill you within 20 minutes of being bitten. The fact that our bathroom consists of a roll of toilet paper and any bush you can find did not help matters. A lot grass along the trail along the way had been burned to rid some of the snakes. I stayed as close to the guides as possible.

Luckily it was a nightmare and not a premonition. Hike starts tomorrow.
Email ThisBlogThis!Share to TwitterShare to FacebookShare to Pinterest