Up 2 am, shuttle to airport at 2:45 am and then flight to Cairo at 6:45 am. Need sleep, but stuff to see. Hired a taxi to take me directly from airport to Great Pyramids at Giza. The taxi driver headed towards Cairo and after 30 minutes traffic was almost at a dead stop. After about 15 minutes of this I asked why we didn't take the Ring Road. He said that is a great idea and off we went. Knew this by some research. It is a little longer but usually not much traffic. Arrived at the Pyramids and my guide immediately took me to his boss who tried to sell me a camel or horse tour of the pyramids. My original plan was 45 minutes of pictures and off to the train station at Giza. I held to that plan and it was really easy to walk around and take the pictures I wanted.

Then off to the train station for what was supposed to be catching the 12:20 pm day which is forbiden to tourists. But was going to try and get on and pay the conductor. Unfortunately, the upcoming Feast was approaching and everyone was trying to get on the trains to see family. Was told there could be a lot of danger trying to take a local's seat on the train. The night train, for tourists, was $80 and I would have to wait 10 more hrs at the station. Went to airport and bought a $100 plane ticket to Luxor. What a day. 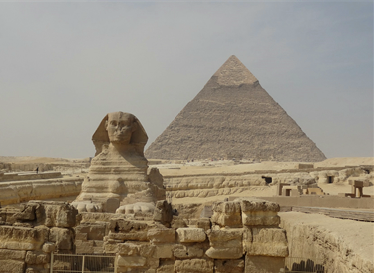