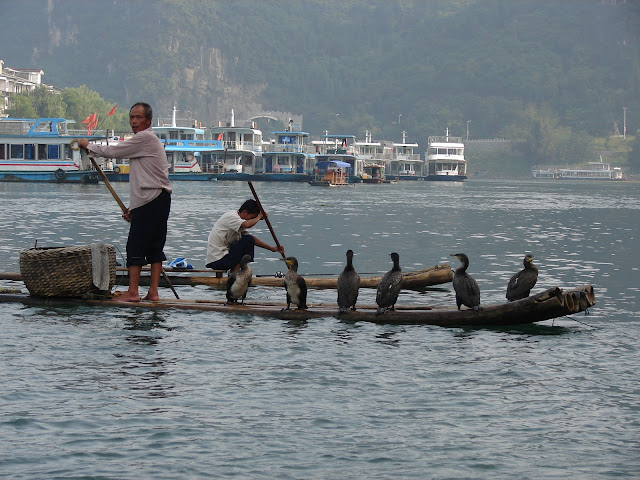 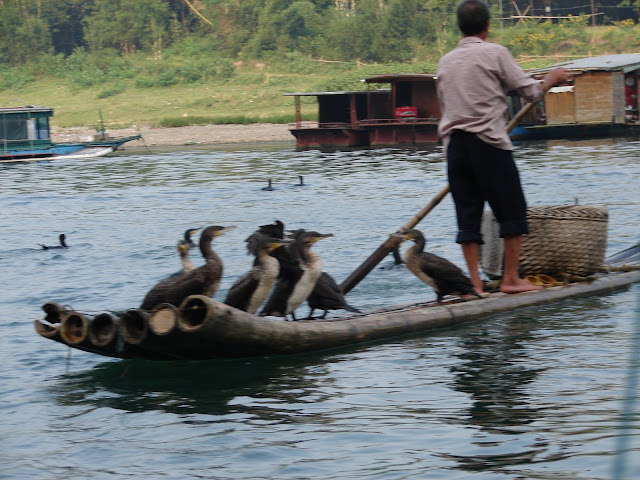 September 19, 2008
This tale began shortly after arriving in Yangshou. I walked down to the tourist area by the Li River just to see what kind of river tour specials there were. It was about 3 pm.

I initially planned on during the Li River Cruise from Guilin to Yangshou to see the karst peaks along the river. The prices ranged from 325 yuan ($47) for the Chinese boat to 500 yuan ($71) for a six hour cruise. I had googled cheap Li River Cruise and got a blog that suggested going to Yangshou and then hiring a fisherman in a bamboo boat to take you up river 3 hrs and get the same experience for 100 to 150 yuan. That is what I did.

Ok, it is now 3 pm and a lady tell me that they have a bamboo boat for only 150 yuan if we leave now since I am by myself. I get her to drop the price to 120 and we go down to the river where I see this bamboo boat with 3 benches and an umbrella covering. It has a small motor to help it get back upstream. The lady tour guide and I had agreed on the destination but there were a few points which I did not understand completely such as why we were to make an initial 10 minute stop and how I was getting back.

After about 30 minutes of cruising down the river she pointed that we would now be making that 10 minute stop. After she got out of the boat she motioned for me to follow. When I asked why she pointed down river and said police. That is when I remembered reading somewhere that it is illegal for fisherman to take passengers up and down the Li River. That is why everyone is on the crowded tour boats.

I smiled and off we went down some dirt path. Our 10 minute path turned into 20 minutes and then finally we ended back up at the river bank. She looked for our boat and the fisherman but he was nowhere in sight. All of a sudden she came back up the bank and said the police boat was coming towards us. She got on her cell phone and called the fisherman (not the first time they have done this obviously) and off we went down another path to another location. We came upon a boy on a motorcycle and she talked him into taking us to the other river bank further down the river. The sight of the boy, me and the woman tour guide on that little motorcycle going down an old run down concrete path had to be something to behold.

Finally after an hour we were reunited with the boat once again. We cruised for another 2 hrs down the Li River and the scenery was stunning. We passed several large cruise boats that were loaded to the brim and they all stared at me in amazement. We reached the local village, I took a few pictures and we headed back upstream.

To the bus we went and 45 minutes later I was at my hostel. What a Great Day. Also, got that Toilet Thing Going On Too. LOL see previous blog if you dont know what I am talking about.
The Comorants (duck-like) in the first 2 pictures are trained by the fishermen. They tie a rope to them including a thin rope around their neck so they can not swallow the fish they catch when the dive underwater. I have seen underwater footage on the Travel Channel showing them swimming underwater and catching fish. 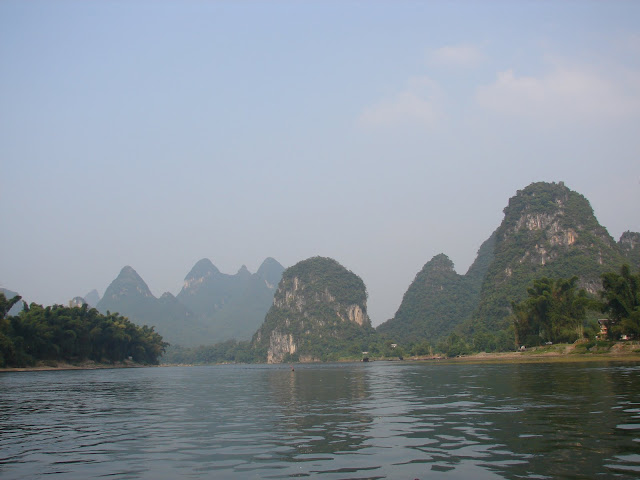 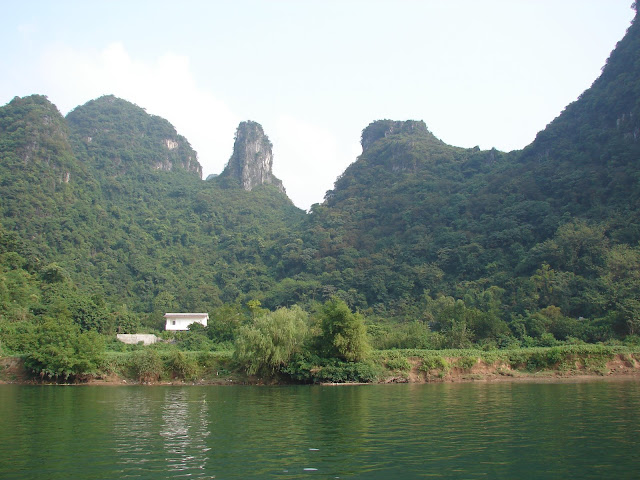 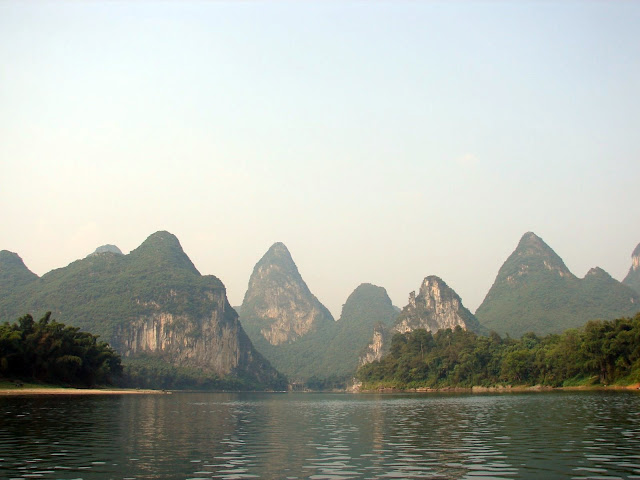 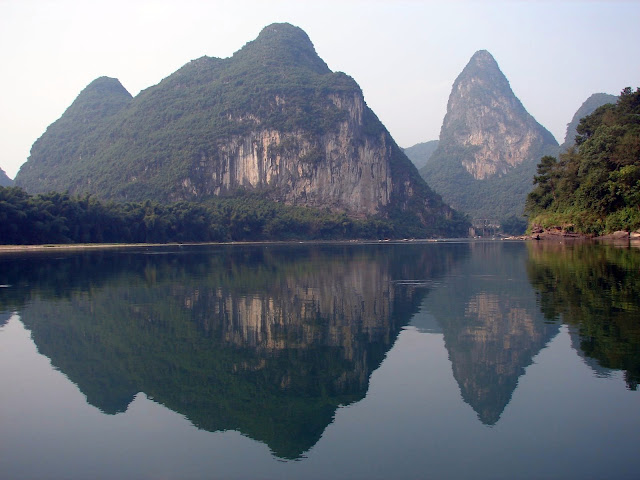 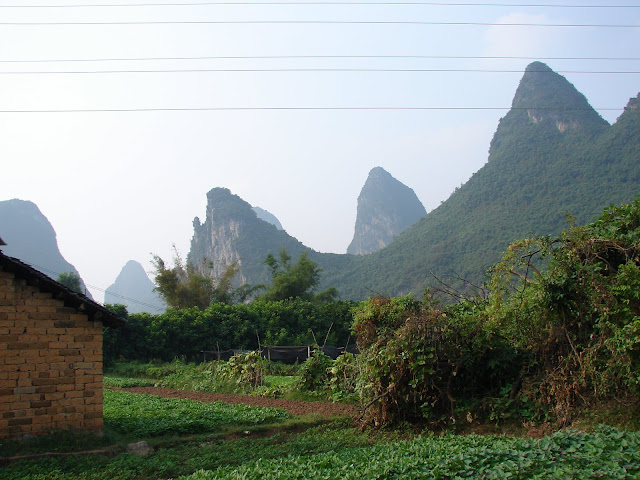 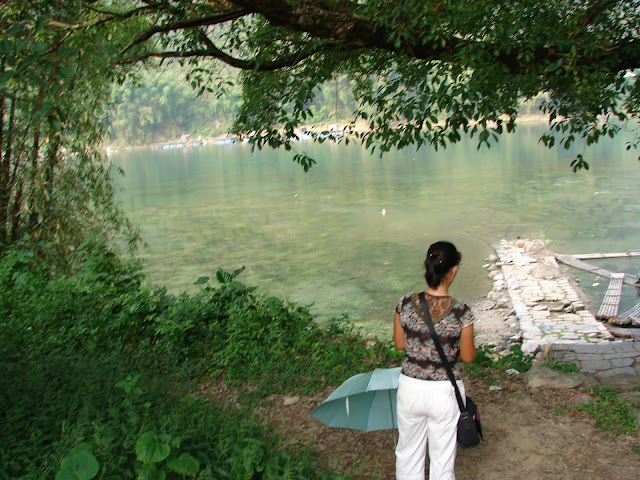 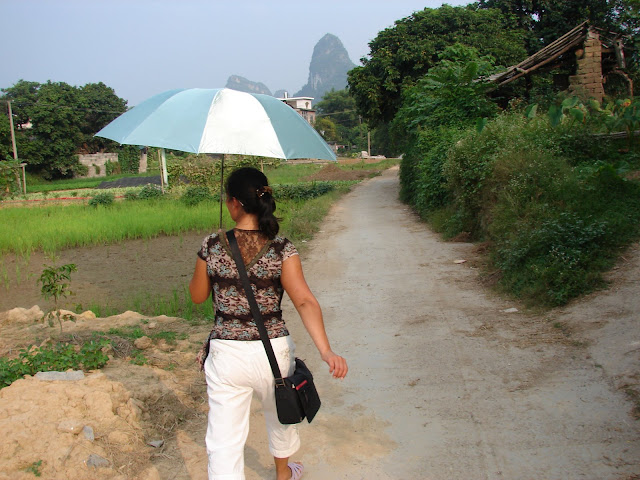 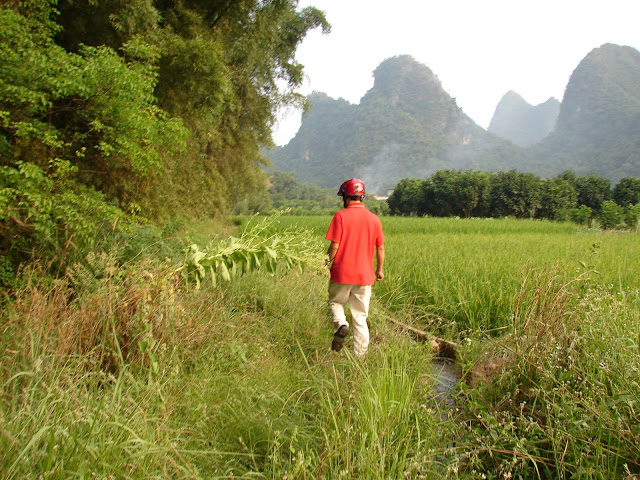 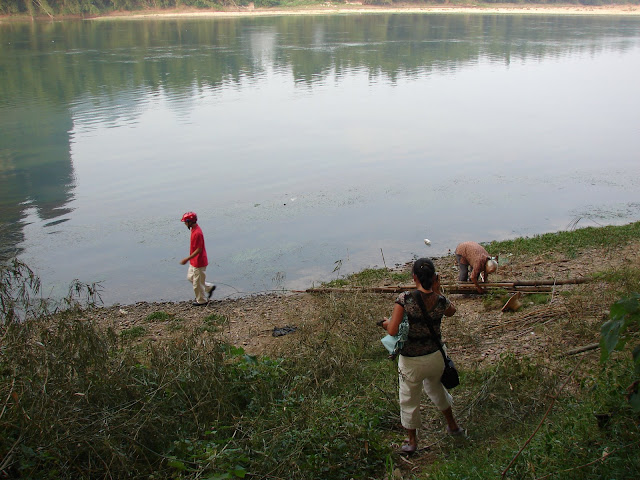 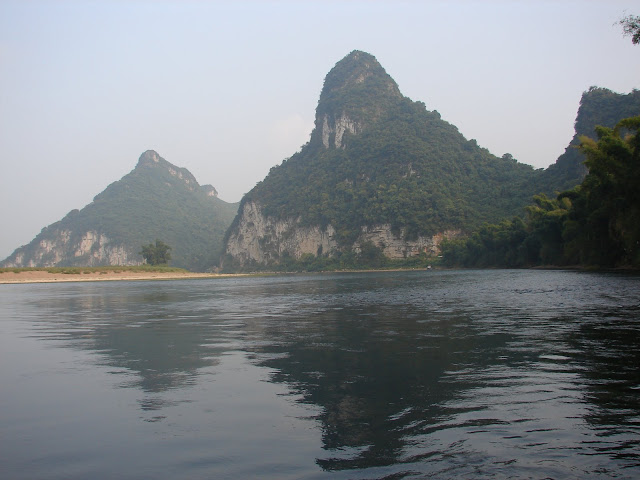 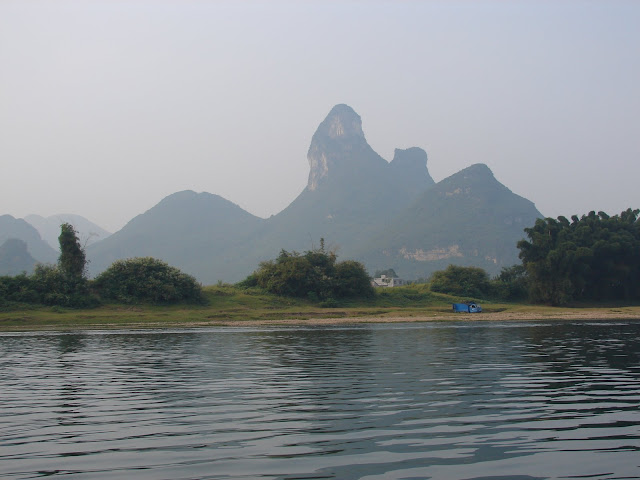 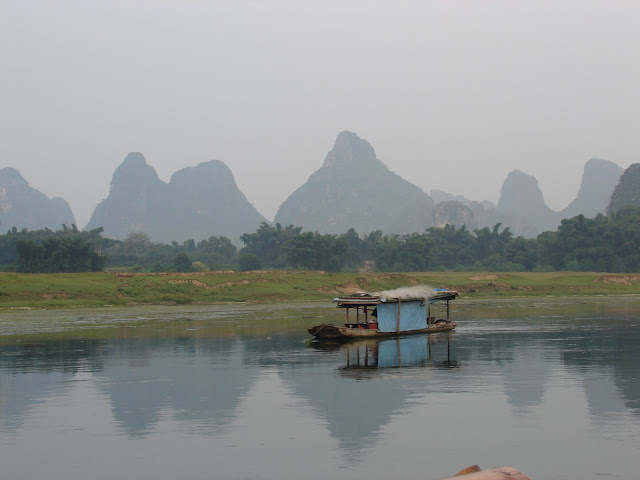 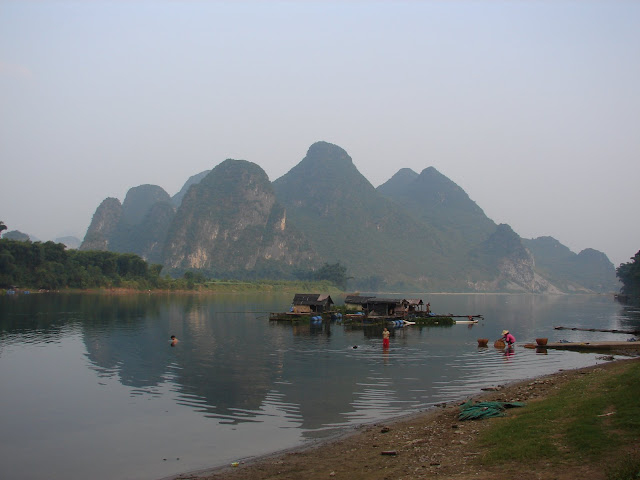 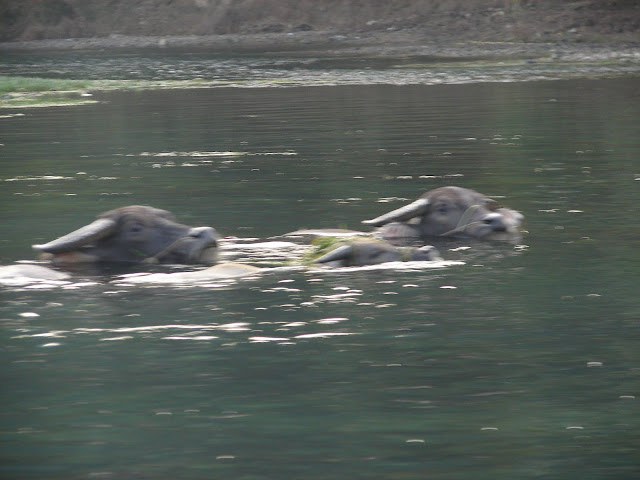 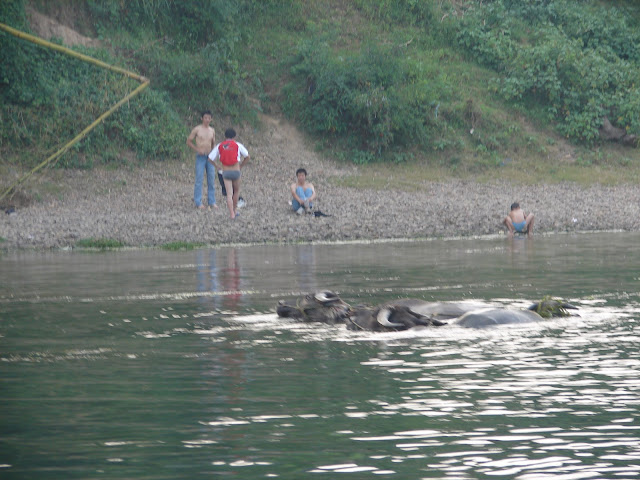 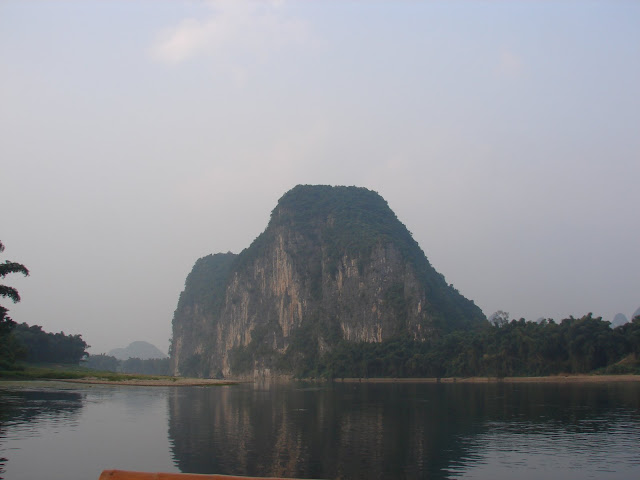 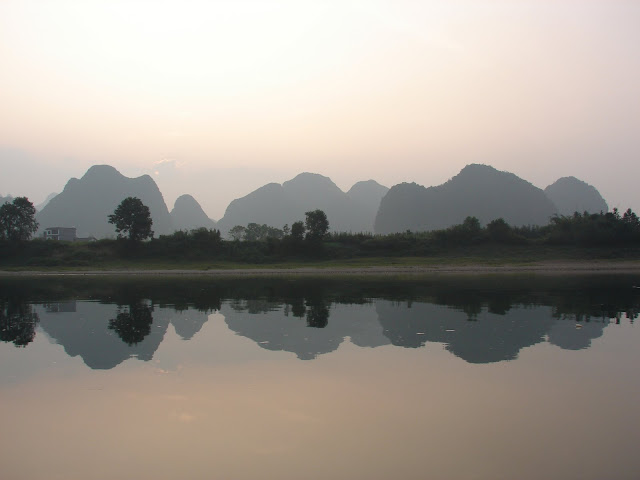